The production process of Hanji
Visible Exhibition
About Hanji
Hanji, meaning "Korean Paper," is a handmade paper that uses the tool called "Hanjibal" with paper mulberry as its main raw material mixed with water and hibiscus. There are various stories about the origin of the word, "Hanji." As stated above, the name Hanji could imply Korean paper by using the letter "Han" with the meaning "Korea" in Hanja, or it could connote the fact that Hanji made in winter is better quality, so the letter "Han" is defined as cold in Hanja. Hanji was also known as "Back-Ji" with the letter "Back" meaning white in Hanja since Hanji is clean and white, just like Koreans being represented as the white-clad race.
Another reason why Hanji was named "Back-ji" is that the word "back," meaning 100 in Korean, implied that Hanji required 100 times of effort. The name that should be pointed out is "Hanji" with the letter "Han," meaning cold in Hanja. Those who completed the busy farming season between spring and fall harvest young paper mulberry bark during the relaxed winter season (November to February). As mentioned above, Hanji made of the paper mulberry bark harvested during that season are the best quality, so it was named with "Han(cold)." Especially the paper mulberry bark cut in the cold winter is stabilized in terms of composition.
Furthermore, since the temperature is low, it does not diminish the viscosity of hibiscus. (Hibiscus tend to lose its viscosity in high-temperature condition) Therefore, Hanji made in this season can be sustained the longest due to its fiber entanglement that results in high-density and robust paper.
1. Harvest the paper mulberry/ peel the bark
The first process is making the paper mulberry raw material. Young one-year-old paper mulberry is harvested between November and February when the fiber is well-generated with adequate moisture. Wonju Hanji is produced using the white inner skin of the paper mulberry cultivated from Wonju.
Harvest the paper mulberry 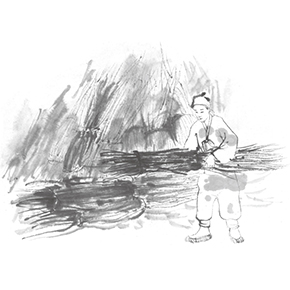 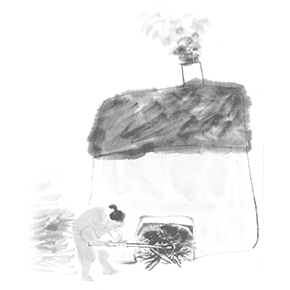 2. Boil the bark in lye/ Rinse the bark
Soak the whitebark in clean water for a day after removing blue bark and black bark and boil in lye for 4-5 hours and remove the lye. Leave the well-boiled bark in caldron for 7-8 hours, then, soak into water for 3-4 days so that the elements except for the fiber such as sugar content, pollen, and oiliness are removed. After, pick out the remaining dust on bark by hand.
*lye: lye has alkalinity, and this prevents Hanji from destroying fiber from oxidizing
Making lye 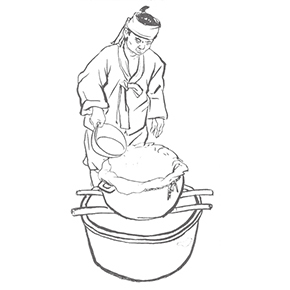 Boil the bark in lye 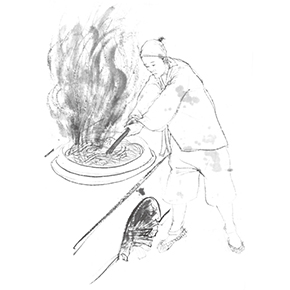 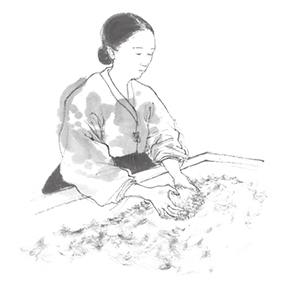 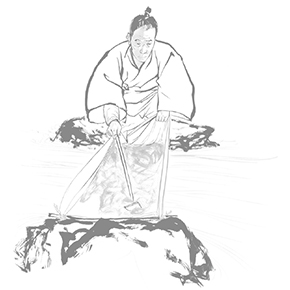 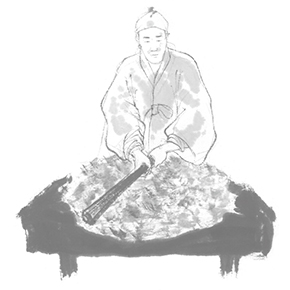 Loosen up hibiscus onto the bark 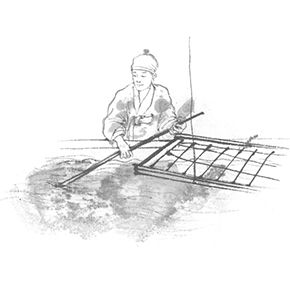 4. Hanji Lifting
The paper mulberry fiber and hibiscus that has been broken into pieces are moved into a paper container, and fibers are untangled by stirring with a stick. Then, the bamboo chick is used to let hanji flow from the sides. This method is called flow lifting since water is passed through, and since there is a single string attached from the top, it is also called one leg lifting.
Single string lifting 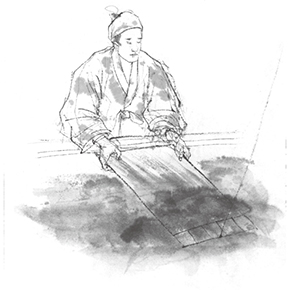 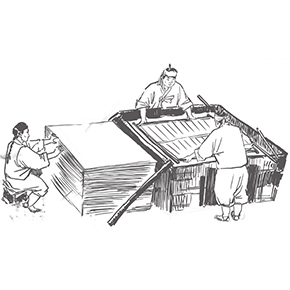 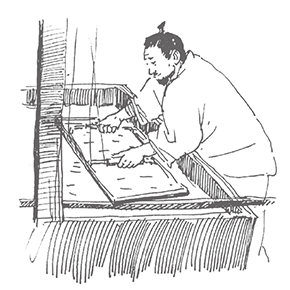 5. Drain Hanji
Papers made from one leg lifting method are stacked in several layers, and heavy rock is placed on top of it to drain for a day. One amazing characteristic about hanji is that before draining papers are mixed like broth, but after, these papers are no longer mixed, so it does not disperse or get ripped.
Placing cylindrical wood stick 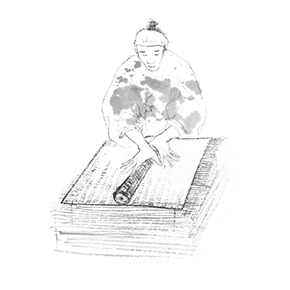 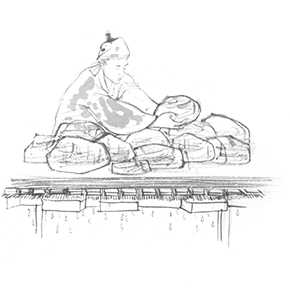 6. Drying Hanji
Hanji is dried on a heated floor or wall, or dried naturally below the sunlight. These days, a heated iron plate is frequently used to dry hanji.
Sundrying 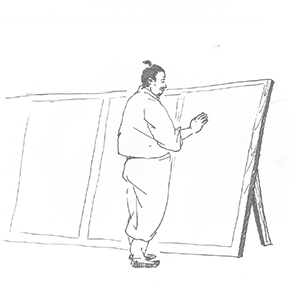 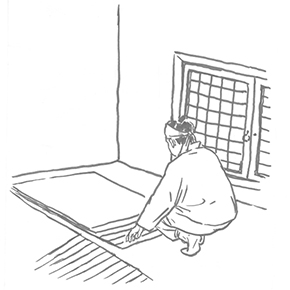 7. Tap hanji
The final most important step is the method only used in Korea. It is a Method to smoothen hanji by beating it on a fulling block. (Dochim) It is our nation's know-how of tapping between fibers densely to strengthen the paper.
Ironing method by beating cloth on a fulling block 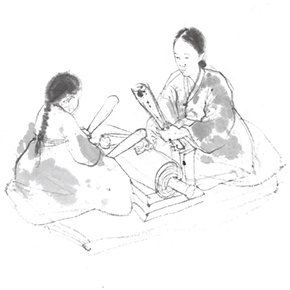 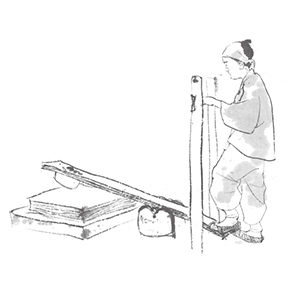 Three Production method for durable and long-lasting Korean hanji
1.
By rinsing tough fibers collected from young paper mulberry and drying under the sunlight, fiber is not damaged, and Hanji's unique luster is maintained.
2.
One leg lifting method lets hanji fiber intersect perpendicularly and make the substance durable.
3.
Using Korea's unique method of smoothing Hanji by finely beating it on a fulling block to strengthen Hanji.